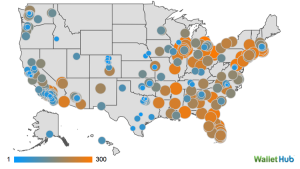 Eight Arizona cities are rising in the ranks of healthiest housing markets in the U.S., according to a WalletHub study. They all landed in the top 50 healthiest U.S. housing markets for comparably sized cities based on population.

Gilbert, a midsize city, ranked the highest of the Arizona cities at No. 11. Chandler was next at No. 22 and Tempe r
anked No. 28 in the midsize cities. Among large U.S. cities Mesa ranked No. 40 and Phoenix was No. 46.

The website consolidated rankings in 14 criteria, including pricing, percent of homes still under water, days on market, affordability, and other measures to determine the healthiest markets in the U.S.

Other Western markets ranked high as well. Seattle (No. 2, large) and Denver (No. 3, large) ranked higher than all Arizona cities. Salt Lake City (No. 21, midsize), trailed Gilbert, but was just one ranking ahead of Chandler.