What Do Rising Interest Rates Mean for the Housing Market?

Today, I want to revisit a post I wrote just over two years ago. I’ve updated some of the data, but the concerns and the conclusions remain timely. In keeping with one of my recurring themes, this is also an example of how rising interest rates won’t mark the end of the world but, rather, a return to a more normal environment.

That is, as rates rise, will we see average housing prices level off or even start to decline again?

This question is becoming increasingly relevant. Mortgage applications have fallen in some weeks recently as rates have risen, and the average mortgage rate just ticked back toward 4 percent, for the first time since the end of last year.

To keep this in perspective, rates are still at almost the lowest levels since records have been kept, per the chart below, and are still down significantly over the last year, despite the recent uptick. 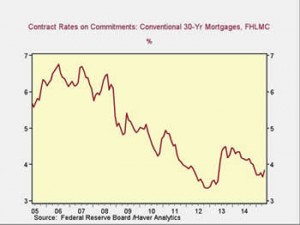 Nonetheless, perception is reality, and buyers look at rates in the context of their recent experience.

Will an uptick in rates hurt demand?

At the end of the day, the future of housing depends on the market, on supply and demand. Let’s consider demand first; without it, supply is irrelevant.

Here’s an example: Assume a two-income family, with both husband and wife employed full time. The most recent data from the Bureau of Labor Statistics puts median weekly income for men over 25 at $944 and women at $759. This equates to a combined income of $1,703 per week, $7,380 per month, and $88,556 per year. At 28 percent of their income, a typical ratio, this family could afford to pay $2,066 per month on their mortgage. It’s a bit more complicated than that, of course, but this is a reasonable approximation.

Based on this payment, with a typical 30-year mortgage and a 20-percent down payment, this family could support the following mortgages and home purchase prices. You can see that higher rates do indeed affect the affordability of a home.

The first thing I would note about these calculations is that no one in their right mind would actually borrow this much. These numbers represent what a borrower could conceivably qualify for, not what he or she should actually do. Nonetheless, they provide a guide to affordability overall.

The median price of a single-family home, depending on which data set you look at, is around $220,000, a nice round number. If we look at the figures above, we see that even at rates of 6 percent, affordability for the average family does not look to be a problem, even if rates continue to rise.

Taking a more restrictive view, using after-tax income, for example, we still find housing affordable at rates well above current levels. Using a 35-percent effective tax rate would give our family an allowed monthly mortgage payment of $1,343, which would lead to the following numbers:

Another way to look at demand is to compare the relative costs of buying and renting. After all, just because a family can afford to buy doesn’t mean it will. What if it’s cheaper to rent?

Comparing the costs of renting versus owning is not simple; the numbers I have for the median apartment rental rate in the U.S. range between $801 and $1,430, depending on the source. For purposes of argument, let’s use the U.S. Census figure from 2011 for units built in the past four years, or $1,052. (Given rent increases since then, the rate is probably well above that, but it should be close enough.)

Using a 20-percent down payment and the median house price of $220,000, the monthly mortgage costs are as follows:

The biggest thing I’m ignoring, however, is the down payment. The reason I’m not considering it is that the down payment has always, except for the period from 2005 to 2007 or so, been necessary. The need for a down payment is not a new factor but represents current conditions, and we do not need to model a change in this analysis.

In the end, buying demand for homes does not seem likely to be crippled by higher interest rates, at least in the immediate future. With a down payment, it is now generally cheaper to buy on a median basis and should continue to be so for some time, with all the other benefits of homeownership thrown in for free.

Given the amount of pent-up demand out there (look for another post on this soon) and the limited supply of homes available, it seems more likely than not that both demand and prices will continue to increase even if interest rates continue their climb.